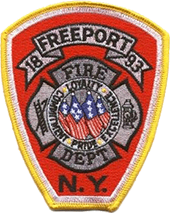 FREEPORT - Officials in Freeport honored a group of firefighters who saved a man from a burning building last month.

The incident occurred on the morning of Oct. 18 at an apartment complex at 250 West Merrick Road.

Edgar Algiere was unconscious inside the apartment after a kitchen fire. Firefighters forced their way inside and carried him to safety. Capt. Anthony Sotira and former Chief Bill Walsh said they found Algiere while crawling on the floor through thick smoke.

"We are very fortunate to have dedicated volunteers who do this day in and day out," said Maguire.

Algiere said he was thankful for the fire department. Algiere says he found his cat Jerry safe and sound hiding in a closet when he returned to his apartment several days later.

Algiere will be spending Thanksgiving with his sister in Vermont.