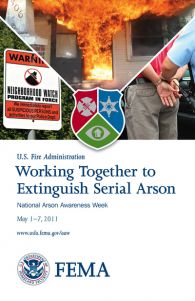 Emmitsburg, MD – The United States Fire Administration (USFA) is pleased to partner with the International Association of Arson Investigators; Bureau of Alcohol, Tobacco, Firearms and Explosives; USAonWatch; National Association of State Fire Marshals; National Volunteer Fire Council; and the Insurance Committee for Arson Control to announce the theme for the 2011 Arson Awareness Week: Working Together to Extinguish Serial Arson. USFA and its partners will use the week of May 1st to the 7th to focus public attention on the value of a collaborative effort with law enforcement, fire and emergency service departments, and the community to battle serial arsonists.

The goal for this year’s Arson Awareness Week (AAW) is to focus attention on serial arsonists and provide law enforcement, the fire service, and communities with tools and tactics to prevent arson in their city and towns. “A serial arsonist can paralyze a community with fear,” said Glenn Gaines, Deputy United States Fire Administrator. “Each fire feels like a personal assault. Banding together as partners strengthens our resolve and can bring law enforcement, the fire service, and the public together to more effectively fight the crime of arson.”

Many communities across the country are experiencing a rash of serial arson-related fires. Serial arson is defined as an offense committed by fire setters who set three or more fires with a significant cooling off period between the fires. These types of fires are plaguing many rural and urban communities causing significant loss of life and millions of dollars in property damage, adding to the suffering already caused by the current economic climate.

The Bureau of Alcohol, Tobacco, Firearms and Explosives (ATF) reports that from 2009 – 2010 there were 88 reported serial arson incidents with an aggregate monetary loss of $4.8 million. Arson in residential dwellings accounted for 49 percent of these incidents. The National Fire Protection Association reports that in 2007, three firefighters died and 6,100 were injured during response to intentionally set fires.

According to the USFA’s National Fire Incident Report­ing System (NFIRS) data, from 2004 to 2006 an estimated 210,300 intentionally set fires occurred each year in the United States. Intentionally set fires account for 13 percent of fires responded to by fire departments across the Nation. These fires resulted in an average of approximately 375 deaths, 1,300 injuries, and $1.06 billion in property loss each year.

For more information regarding the 2011 Arson Awareness Week, go towww.usfa.fema.gov/aaw/.

For more information regarding the Fire/Arson and Explosion Investigation curriculum, or any of the other courses offered at the National Fire Academy, go to www.usfa.fema.gov/nfa/.